What is it that makes Manila different? I came here, in this former Spanish and American colony, to find out.

As a history buff, the Spanish and American influences jump out wherever you go and whoever to you. The society leans more toward the Americans; this is one of the biggest markets in Asia in terms of Hollywood movies. All those facets of consumer life in America? It’s slowly being adopted here, the long lines for gadgets, Starbucks, capitalism, it’s all in here. But then, you look a little closer to how Filipinos live, there’s still an admiration for tradition. You can still families everywhere, local restaurants that serve local fare are still the biggest hit, and they are thrifty. You can say that it’s somehow rooted in the catechism in the country, as the Philippines is one of the biggest catholic countries in the world. It’s a remnant of Spanish influence, and a big one.

But as a tourist, these are all dry facts. Nobody’s going to bother you with a bible, and as hospitable as they are, they still like it when everybody minds their own business. It’s not bad since Filipinos aren’t a loud bunch. You’ll care, however, about the local culture. But to enjoy the mainstream indie scene (I know, right?) and the endless snacking options, you’re going to need a convenient place to stay.

Your Home is Your Gateway to Culture

There’s this long stretch of road in the Philippines called EDSA. It’s an acronym for Epifanio Delo Santos Avenue, sometimes also called Pan-Philippine Highway, which is the main highway in all of Metro Manila. Think of it as the spine of the biggest cities here, Quezon, Makati, Taguig, and Mandaluyong. Most tourists stay in Makati or Taguig, in Ayala Avenue or Bonifacio Global District, because that’s where it’s most familiar with tourists. It also helps that these places are central business districts, meaning that there’s buzz here like in any other first-world cities. Quezon City is sort of a maze with attractions that you have to look for, and Mandaluyong a big, burgeoning capital of society.

You’re safe in Makati and Taguig, but if you’ll be staying in Mandaluyong, look for places in Ortigas Center. It’s a big business district that’s still cozy. There are several hotels around, and taxi services are everywhere. You can even walk as the area is small enough for a mini-adventure in the afternoon. If you’re staying in Quezon City, your best bet is at Araneta Center. It’s sort of an unfinished business district, but that’s the appeal. There’s a wet market with everything from flowers to firewood, and there’s certainly a culture of partying in the district. It’s a bit old, but if you want to experience Philippines in its early rise, this is where you’ll see relics of (old) New Manila.

The Advantage of Hotels, Airbnb and Rentals 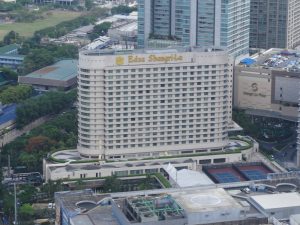 Hotel has that outright upper hand of being accessible. If you stay in Shangrila, Raffles, Ascott or Holiday Inn, it’s easy to travel from there. Then you have all the hospitality amenities, but personally, I found it extremely limiting to live in a hotel in the business district. I had to always order, which gets expensive over time, and if I had nothing to eat, I buy from the convenience store. 7/11s here are limited, so I wouldn’t count on them for good food. If you have money to go to restaurants every day, hotels will do. If not, and even if you do, reconsider staying in a fancy hotel.

Airbnbs are becoming popular in the country for tourists and locals, and for good reason. There’s more value in having an entire apartment, complete with all the things you have at your own home, than in a hotel room in the middle of the business district. You have to know, though, that if you do this, you have to go out of your own way to make it work for you. You’ll have to go grocery shopping, which means looking for the nearest one from you. You’re going to have to put up with locals, which as I mentioned was not really that bad. You’re basically on your own, and I was fine with that. I chose a place near a supermarket and a recreational area where they had events every weekend. I also learned to use the tricycle, one of the most popular forms of transportation here. It’s large enough to accommodate me and my groceries, and it’s cheap. Like change-in-your-smaller-pocket cheap.

As for rentals, you have the choice to go apartment hunting or just look for accommodations that offer long-term stays. These places are usually fully furnished, and if you really have to have these things, it’s your best option. That’s because if you have to experience Manila in full, you’re going to have to live like a local. I did, and it wasn’t so bad.

Manila isn’t as big as most metropolitan cities in Asia, but there’s no way to say this, it’s better to commute everywhere. Sidewalks here aren’t really big enough, and walking isn’t pleasant. The climate just doesn’t allow 10-minute relaxing walks, and even less the social infrastructure. It’s getting better, but for some reason, the focusing is building more skywalks. I really don’t know why, but the skywalks are becoming more and more common here. It’s a good way to connect a district, but it just seems so impractical to me.

That being said, if you’re a night owl, you’re going to enjoy a bit of walking. It gets quiet, and in business districts, it’s safe to roam around. Then you’ll get to spot hidden bars and nooks where you can get cheap beers and probably even live music. Filipinos still aren’t the biggest fans of listings, although you can use Zomato if you’re lazy to find a bar by adventuring. If you have the time, take a walk.

As for commuting, you have one option and that’s Grab. It’s basically Uber, so turn on your location and point the driver where you want to go. You may have to put up with some unreasonable fare from time to time, but it’s the most convenient option.

If you get around the quirks of living here, and I say this having lived in first-world countries in Asia, Manila is one of the best cities. One thing I learned as I getting used to the city, the city is getting used to me. I started to see more of the places I look for the more I stayed here, and before long, I started to make friends who are similar people to my friends back home. It’s weird, but in Manila, things find a way of working out.