Loyalty is neither a man’s creation nor his property, but we sure do make a lot of fuss over it. Be loyal to your family, be loyal to your friends, be loyal to your significant other, we’re told to be loyal to everyone in our life because they are our priority. We follow it to a fault, even if we shouldn’t at times, but it’s something we and society ingrain in ourselves.

But we’re awful at it, aren’t we? For all of our efforts to be stand by our loved ones, morals, and principles, men have always been the root of unfaithfulness, disloyalty, and hypocrisy in our circles. Many of us seem to care only about ourselves, with only a sliver of concern for the needs of others. Our loved ones have to bark at us to be more sensitive, to be more attentive, and to think about our actions more. All because it’s unnatural for many of us to look out for someone else.

So, it’s only reasonable to say that we fail at being loyal. It’s either we don’t have it, or we make a terrible judgment of who to trust. We’re not the fairer sex, and that’s fair.

It’s hard to unlearn selfishness and insensitivity, especially if you’re not aware that it’s a part of your personality. It’s even harder to shake off the bad habits when someone just drops it on you so casually, as our girlfriends and wives often do. We react harshly, maybe even reject the notion altogether. And for a gender who’s so famously known for dealing with facts, we seem to be inept at handling facts about ourselves.

That’s why if you’ve failed at another relationship, failing the one you’re in right now, or just in limbo, you should get a dog. We don’t deserve these four-legged friends, but don’t tell them that. If we’re not going to listen to anybody, dogs will give us the lessons we so desperately need to learn. They won’t even care or know about it, but they make our lives better.

A Friend, Pure and Simple 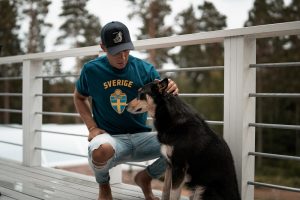 We always see it in movies, bad guys with cute dogs. A murderer with a dog for a best friend, a mobster who treats human lives like currency to spend but sees a dog’s company as the best relationship he’ll ever have. There’s a reason for that, because dogs are the best. They possess all the qualities we want in ourselves.

But before we discuss how dogs make better men, let’s admit it: dogs make for awful companions sometimes. They shit, piss, and leak glands, the most disgusting of them all. They destroy furniture, rip the all-important tissue, and costs so much to maintain. Many dog owners spend more on their dogs than on themselves. How could a creature who can live on water and pellet food require so much money to live?

Nonetheless, for all that they excrete, consume, and dismantle, they give more. They become our most loyal friend, a company who never asks questions and just sit there with you in your most apocalyptic days. They help keep you safe; even a small terrier will keep your home safe from invaders. Dogs simply evolved like that, so any one of any size will already have the senses to stave off people who want to hurt us. These are all of the things we want to be, and who we want to be for other people, and these dogs are doing it better than us for a few pets, some food, and morning walks in return.

Dogs are better than people! But don’t tell them that. Instead, try to learn from your experience with them.

The Best Teacher You’ll Ever Have 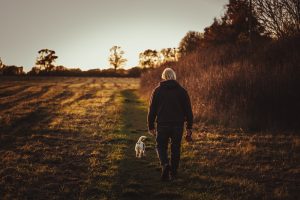 No movie or philosophy will make you a better man better than owning a dog. It’s one thing to gather a tidbit from somebody’s speech or book to help you deal with things internally. It’s another to pick up your dog’s droppings in front of your visitors when he (or she) suddenly feels squeamish because of all the people.

Speaking of gathering your shit, owning a dog will force you to shape up, both physically and mentally. Let’s start with a dog’s effect on men on the inside. Owning a dog is like looking after someone who doesn’t look back. They will do what they do, and they won’t care if you like it or not. You either put up with it or bring the dog to a pound, which is one of the weakest decisions you can make as a man. They will force you to swallow that retch, because no one else will deal with whatever it is that your dog discharged. You both will live in filth if you don’t, and trust other dog owners in knowing that you’ll bend because you’ll want to give your dog a nice home.

Dogs will also teach you about selfishness and patience. Back when you lived with yourself, you can do just about anything you want. Live in squalor, and no one will care. With a dog, though, you’ll learn to ponder your actions and decide if this will affect him. Slowly, you’ll care more and more about what you do and how it affects others. You never thought that leaving food everywhere was harmful? Wait until your dog’s stomach gets upset and you have to pick up their sick everywhere, before knowing that you have to take him to the hospital. 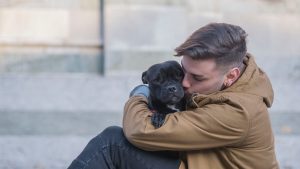 As for patience, there’s no other way to teach your dog to sit still, catch the ball, or be quiet than to be patient and wait for them to get what you’re talking about. You can’t be mean to them either, not because that your dog will bite back, but you don’t foster love by shouting. You grow that friendship through understanding (a lot of it) and tenderness, one quality we men could use more.

But the best thing dogs can teach us is the virtue of giving. The thing about being a better man is that it’s all about what we can improve ourselves, not what we can do for other people. By giving other people patience, time, and understanding, we put in practice what we think will make us better men. Dogs do it all the time, I’m sure us upright, sentient beings can imitate the good that they do.

The world isn’t lacking for its love of dogs. You probably wondered why some people treat dogs like their friends, much like I did before. But then, when you see them, they really do look like their friends. And even if only one of them can talk while the other will only shout at you, it’s one of the most rewarding experience any man can get.