Featured Image from: The Telegraph

What is the ideal word to describe Lionel Messi’s footballing talent? It’s certainly neither “outrageous” nor “crushing,” journalists’ favorite adjectives when describing one-sided matches and brilliant individual performances. Considering what he can do with a football, it would be accurate to call him as “magical.” Why? It’s because we can collectively agree that Messi’s greatest displays were not improbable; they were in line with what we thought to be impossible.

No matter how much Ronaldo claim to be the best in his vanity project veiled as a documentary, there is no way he is better than Leo. In a typical American sports fashion, this article showed why Lionel Messi is an impossible athlete through his otherworldly statistics. It’s quite dull of a read, especially when it’s obvious that the writer only knows the player by his numbers, but it nonetheless shows how Messi is so far ahead of everyone (forwards and attacking midfielders!). It’s awe-inspiring how productive he is in everything he’s supposed to do: scoring, assisting, passing and initiating plays in general. The only sportsman who can compare to La Pulga’s stats is the Great One of hockey, Wayne Gretzky, who himself holds near-unbreakable records in National Hockey League.

There is one aspect of Lionel Messi’s football career no one pays attention to (as far as I’m concerned): how he bounces back from injury without missing a step. In November 2013, when he was supposed to be helping his team and maintaining form for the upcoming World Cup, he was sidelined for two months. Barça ended up empty-handed, but he was fit enough to be Argentina’s star player in Brazil. His awarding of the Player of the Tournament was dubious, even Maradona questioned it, but based solely on effort and will to carry his team, he deserved it. More recently, after going down at Las Palmas and being absent for two months, he regained form immediately. 11 goals since coming back, there is nothing that can slow down the reigning Ballon d’Or winner.

Speaking of that damned award, FIFA should thank Lionel Messi for existing. For without him, that award and the whole ceremony around it would be a sham. The Germans have already started the boycott this year, finally. Moreover, no one embodies the best qualities of a Ballon d’Or winner more than Messi. Not Ronaldo, not Neymar, not Müller; no one does it quite like the Argentinean.

It’s a crying shame that many football fans rely on highlights to measure someone’s talent. They also make the majority of the most active social media users, making their opinion dominant. It’s what convinced Real Madrid to splash an outrageous amount of upfront money and salary on Martin Ødegaard, presumably. Most of the people in Europe, the English particularly, knew Neymar through YouTube. So, thanks to the footballing gods, Messi lives in the age of massively televised football matches and widespread piracy (sorry, FBI). From the outset, we have been witnesses to his growing genius.

I admit to watching old matches and downloading newer ones to know what’s what. I watch a lot of old, recent and irrelevant games. Also, I admit to watching games with the known stars in them. These include Ronaldinho in his time in Barça; the first Galacticos at Real Madrid (what the hell happened here); Manchester United’s 1998-1999 season; some younger Maldini-era Milan and all of France’s tournaments with Zidane. You know what all of the Ballon d’Or winners from all these teams had in common? They wanted to hog the ball. Zizou is a revered figure unparalleled but had he played for a club where he was the sole focal point, I wouldn’t be writing this. Ronaldinho, the Sun King of Catalonia during his time, is just way too individualistic. On the other hand, George Weah was such a surprise winner, considering Jürgen Klinsmann had a superior season overall albeit with a club that wasn’t competing in the Champions League.

The few BD’Or winners who can actually match Messi stat-per-stat and in overall influence were Johan Cruyff, Alfredo di Stefano, Eusebio, Cristiano Ronaldo, Denis Law, Gerd Müller, George Best, and Michel Platini. Yet, these people pale in comparison to Leo. You have to take in mind who these players are and their legacy in the game. To say that they weren’t able to match Barça’s no. 10 in their prime speaks volume of where Messi stands currently and in history.

There is no considerable gap between the numbers of Cristiano and Leo. They are on par in both goals and assists, but Messi has outdone his rival for most of their time in Spain. The records belong to him, the better trophy haul, the public admiration and an eternal legacy in the country. Ronaldo will be remembered fondly in Madrid forever, possibly be more adored than his Brazilian namesake, but he will never be thought of like Leo. Cristiano is Real’s top goalscorer ever, but he will never win over Raúl for the hearts of the Madridistas. In the game and off it, Messi stands on the shoulders of Ronaldo.

The teams behind these men also helped shape the rivalry. For FC Barcelona, they had a team built around Messi. But, what’s special with that? Real also surrounded Ronaldo with exceptional players. They differed, however, on how they play with their colleagues. For as long as Messi has been playing, the team fed the ball to him and off him. Now, more than ever, he’s ready to give up goals to accommodate Luis Suarez and Neymar (he has all the records, so why bother). He also shared scoring responsibilities with David Villa, Pedro, Zlatan Ibrahimovic, Samuel Eto’o, Thierry Henry and Ronaldinho before. Messi outshone them all, but he always made sure they got their share of the cake too.

As for Ronaldo, he wanted nothing but for his teammates to provide him opportunities to score for himself and keep the glory to himself. There’s nothing wrong with desiring for glory, but to go about it his way is just unbecoming. Just watch him celebrate his penalty goal during the Champions League final against Atletico Madrid. Fine, ignore Alvaro Morata because you scored a penalty in extra time when your team is already up 3-1. You’re the man.

Messi has way too many matches where it shows that he plays for the team, so much that it’s hard to choose one. But, let’s use the Champions League final against Juventus. It is a shining example that Messi is so unfathomably influential that he need not score a goal to have a night to remember. Rakitić, Neymar, and Suarez scored all the goals, but Messi was the icing on this particular cake. Who was slinging the ball to Neymar all night? Who was all over the last third, splitting defenses for his teammates? Who had the dodgy haircut on a setpiece event? I’m kidding about the last one, but that was all Messi. 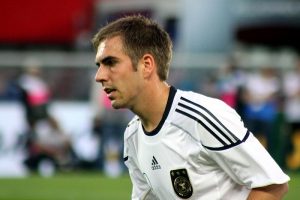 To end, FIFA would be wise to heed the words of Philipp Lahm. Give a Ballon d’Or to each position to make it fair. This way, everyone who actually deserves this “individual” accolade gets what he or she deserves. The current model just fails. Each year, it’s just a big hoopla for an award to who scored the most goals. Ribéry should have won it in 2013, and Manuel Neuer deserved to be the World Cup’s best player.

I hope you enjoyed.