To say that parenthood is challenging is a vast understatement. It’s not just difficult; being a parent will have you at the edge of your seat because it’s also gut-wrenching and anxiety-inducing at the same time. So, one can only imagine how much harder it is for single parents who are raising their children alone.

But it’s time to dismiss the idea that just because mothers gave birth to children, they’re automatically the best people to raise them. The same thing goes for fathers because not everyone should be considered second best. At the end of the day, it all boils down to how much effort the parent exerts into raising their kids.

This is because single parenthood is hard, no matter what gender the parent may be. That’s why it doesn’t make you any less of a parent just because you weren’t born with a uterus and gave birth to your child. The important thing is that you’re the one present in your kid’s life, and that makes all the difference.

So don’t let gender stereotypes or societal expectations get in the way of you raising a kind, beautiful, and smart child who can make morally sound decisions. If you don’t know where to get started, here are three ways you can take care of your kid and become the best dad you can be:

You may not have maternal instincts rooted in nurturing to catch any signs of illness before they even start showing, but you have parental instincts and common sense, which is enough. Don’t let the primitive notions of parenthood hinder you from taking care of your kid in the best way you know how.

Besides, raising a kid is not rocket science. As long as you’re following the recommendations of the pediatric doctor, taking your kid to get their vaccine shots, and providing them with nutritious food, you’re already doing a great job. Try not to overthink what you’re lacking and choose to focus on improving what you have.

For instance, if you suspect that your kid is developing symptoms of an allergic reaction because of an unknown cause, then don’t let your panic overwhelm you. Instead, take a deep breath and immediately get your child tested for allergies at the earliest possible time. Of course, it’s a frightening experience, but you can always react afterward once your kid has gotten the help they need. 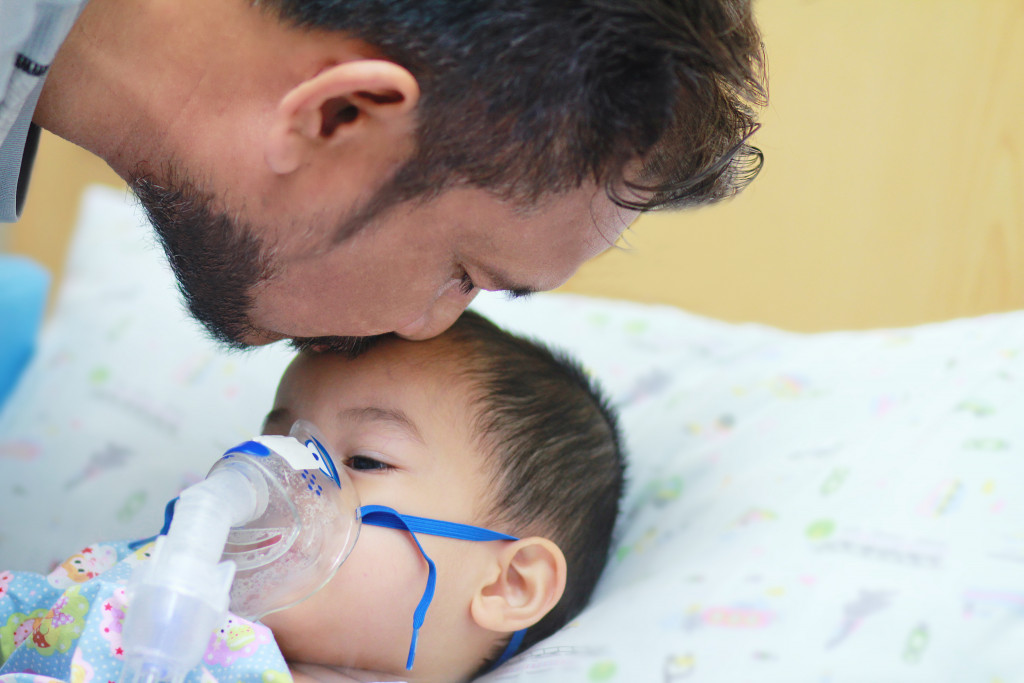 Teach Your Kid About Emotions

You don’t have to be like the other emotionally detached dads who can’t talk about their feelings with their kids. Besides the fact that you and your kid may only have each other to lean on, it’s also very unhealthy to bottle up everything inside. That’s why you need to teach your kid about handling emotions.

Initiate conversations and actively listen to what they have to say. It could be about anything under the sun — what they did in school, their dreams for the future, or thoughts that won’t leave their mind. But try your best not to let other people’s opinions become the obstacle to you and your kid’s healthy relationship.

Despite what media depictions and the previous generations might have led you to believe, showing emotions will never make you look weak. If anything, it can make you even stronger because you’ve managed to get over the hurdles of toxic masculinity. So talk about your feelings and encourage your kid to do the same. This way, your kid won’t have to look for their safe space elsewhere.

Always Try to Lead by Example

Parents are almost always their kids’ first role models, which is why you shouldn’t do anything that can dampen your image. This is not to say that you should be the perfect father because perfection is overrated; instead of striving for perfection, you should strive to be a father who always does his best.

So that means you should lead by example. You can’t say one thing to your kid and expect them to follow if you don’t practice what you preach. For instance, if you’re teaching your kid about the importance of eating vegetables and yet you don’t eat them yourself, then what reason do they have to believe you?

That’s why you should try your best to teach by example. If not for yourself, then at least do it for your kid who may not have anyone else in the world. This applies to eating habits, the kind of lifestyle you lead, the manners you teach, and the behavior you show in response to certain stimuli.

There’s no such thing as a perfect parent, and there shouldn’t have to be. This is because the best part about being human is that you can make mistakes and learn from them repeatedly. So don’t worry that a single mistake will ruin your kid’s life. As long as you’re trying your best to show that you care, that’s enough.